Why You Never Take Your Duramax Lifted Chevy Mudding Alone 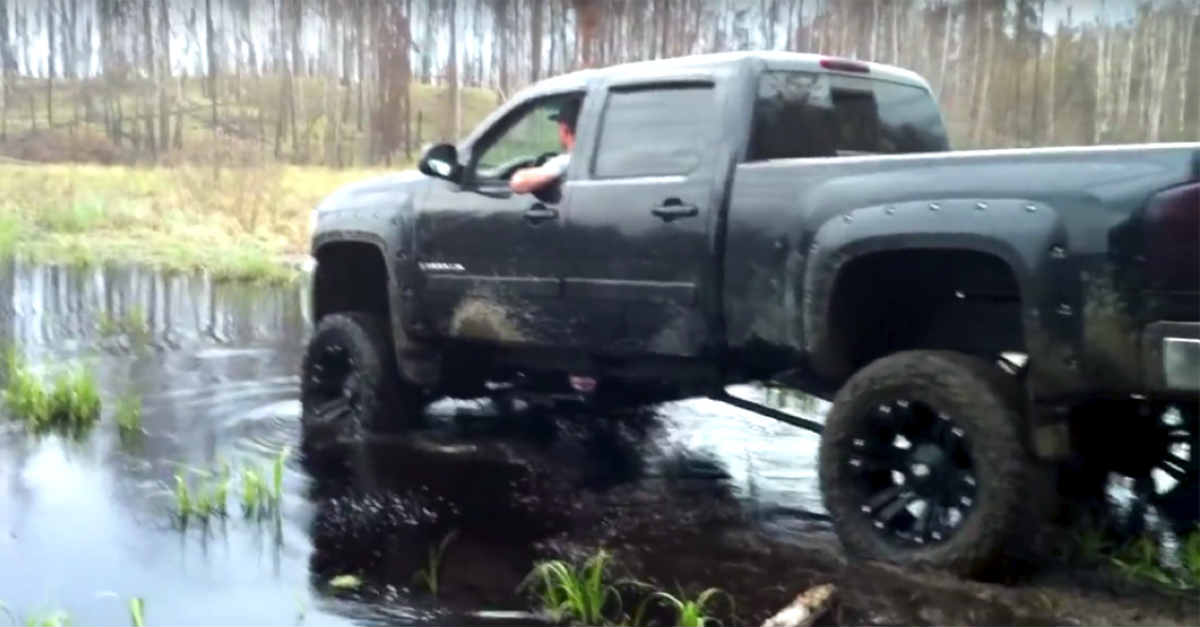 Dirt roads, lifted trucks, mud bogs, sometimes you just have to go for it. That’s exactly what this lifted Duramax Chevy does. This scene is no doubt played out thousands of times each week with teenage guys and adult males nationwide. We can’t help it. It’s in our blood. There’s something about getting inside a big truck and splashing through a massive mud bog that gets your adrenaline pumping. At least, that’s how it should be. It seems our buddy here has more of a problem getting to the other side. If there were a mud bog joke like the “why did the chicken cross the road?” joke, well, we would never know. Take a look at this to see why.

He never makes it. I know it’s sad, try to fight back the tears. It all goes south after puddle one. That first little mud hole needs a bit of coaxing to get him and his lifted Chevy to roll on through, but once he does; his confidence seems to swell a bit. For on that second muddy hole, though he approaches with caution, he is determined… at least until his front tire sinks into the mud bog like a hero in quicksand from one of those old Tarzan movies. What to do, what to do? Well, fortunately he has a few of his buddies close at hand. In fact, it seems like they may have had a sort of premonition about what was going to happen and simply neglected to tell him. However, if you have ever been out in one of these bogs and gotten stuck all by yourself, you know it is not fun. In fact, it can be quite terrifying.

For starters, there is no one around to hook a toast draft or chain to and pull you out. If you have a winch, you have to be able to attach it to something. Often times, in the middle of a mud bog, there is not much to attach a winch to. Besides that, even if you could, you would have to risk getting out in the bog and hoping you didn’t sink in quicker than your lift truck did. It can be harrowing for sure.   So, besides never going out mud riding in your lifted Duramax pick up truck alone, what should you do? Well, here are a couple of tips to keep you and your Chevy moving right on through. Take them to heart, and put them to good use. These will save you frustration, and more importantly, vehicle damage in the long run. After all, the goal of mud riding is to have fun and continue doing it. It really stinks to spend your hard earned money repairing your truck, because you didn’t have the foresight to make sure you could conquer the bog.  END_OF_DOCUMENT_TOKEN_TO_BE_REPLACED

Tips for Mud Bogging Alone in Your Truck

1. Have a way to communicate. That’s right, if you plan on going it alone and you don’t have a buddy with you like our friend, you need some sort of way to communicate with the outside world and call for help. I’m not saying that they won’t laugh at you when they come rolling up in their own lifted truck, but at least you will be able to get out. In that situation, roll with the punches, the only thing bruised will be your ego. I could tell you about the time I was stuck all by my lonesome and two lifted Ford trucks full of beautiful college girls had to pull me out with their winches. My ego was bruised, but I did not really mind it that day. Anyway, that is a tale for another time, my friend. Oh yeah, you might want to bring some snacks along for that ride as well, because you will get hungry waiting on your friends to come and pull you out.

2. Keep some boards or plywood in the bed of your truck. There are a few reasons you should always have some wood in the back of your truck (just let your imagination run wild), yet mud bogging is one of the best. You can use the plywood and 2 x 4s for extra leverage. You can even get really clever with the 2 x 4s depending on your situation. Cross mount a 2 x 4 at the top of your truck tire, and secure it with tow straps laced through the rims. You can mount one on each rear tire, that should be plenty. Then, as you shift into reverse, the boards acts as a bit of a bump-and-grab to give you traction, moving you back, little by little, until you are free. Then, simply detach the boards and tow strap, and you are on your way.

So, you can go mud bogging on your own and still survive with you and your lifted Chevy in good working order. All it takes is a bit of forethought and preparation. Lucky for our friend, he had his buddies following behind in their own lifted pick up. Aside from a few chuckles and muddy suspension kits, it appears that everything worked out in the end. Take the two tips mentioned above to heart. However, even if you don’t, you might get lucky like I did and be rescued by 5 beautiful ladies, or night fall could happen and the serial killers show up. Yeah, I would keep that radio on full charge if I were you.