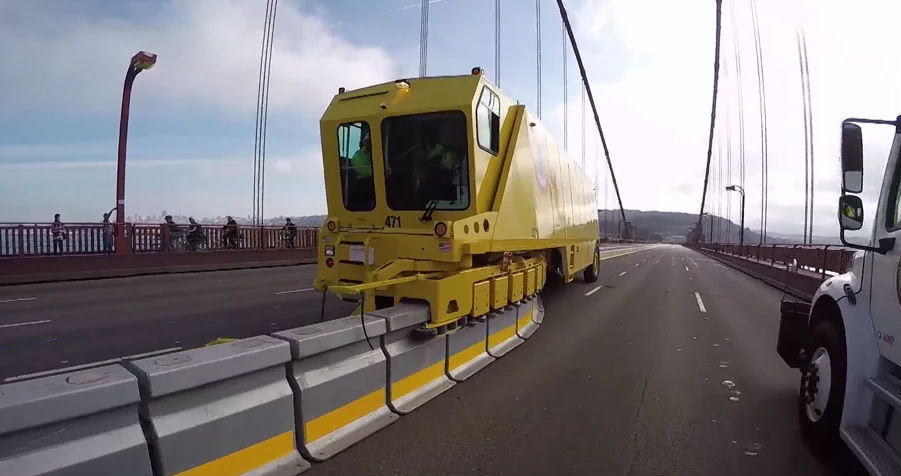 Joining San Francisco to the rest of Marin County, California, is the majestic and highly photographed Golden Gate bridge. This 4,200 ft suspension bridge opened in 1937 and ever since its been a quintessential “must see” spot in any tour of the West Coast. However, traffic and congestion that can build up along this bridge has been a sore spot for both the California Department of Transportation and safety advocates. Built without a divider to separate oncoming traffic, head-on collisions have been a nasty ongoing occurrence.

That all changed in 2015 with the addition of a truck which could cruise down the median barrier strip and seamlessly adjust it left or right. This allows the bridge to adjust to changing traffic patterns without causing too much of an obstruction. Additionally, it takes the Zipper truck a matter of minutes to make these adjustments.

Prior to the Golden Gate Bridge’s acquisition of two median barrier zipper trucks, all that stood in motorists way from veering into oncoming traffic was a thin line of plastic pylons. From 1971 to 2015, 16 vehicular deaths have been attributed to a lack of a dedicated barrier. Discussions about putting in a barrier system were discussed since as early as 1980 but little actually came of it until the Bridge’s Board of Directors finally obtained funding in 2005.

The acquisition of both the barrier system and the trucks came to a grand total of $30.5 million dollars to install. By the end of January, 2015, the system was fully implemented and the trucks are now working flawlessly. Each barrier segment is connected by iron links similar to the intermediary clasps holding together a zipper. As the truck drives along a marked blue dotted traffic guide line, it simply adjusts the line of linked barriers. END_OF_DOCUMENT_TOKEN_TO_BE_REPLACED

This system had been implemented on a number of bridges throughout the world â including Auckland Harbor Bridge and Sydney, Australia. It’s a time effective solution to be

This system had been implemented on a number of bridges throughout the world – including Auckland Harbor Bridge and Sydney, Australia. It’s a time effective solution to being able to protect travelers while still being about to adjust to traffic conditions. And especially with suspension bridges where expansion of the lanes is impossible – this has proved to be the most reliable way to divide traffic.

One of the biggest hold-ups to getting the zipper trucks was actually the narrowness of the lanes. When the bridge was initially constructed in 1937, there were a lot fewer vehicles on the road. Built with two walkways and six lanes, the Golden Gate Bridge design and engineer team firmly believed that this bridge would sufficiently accommodate traffic going into and away from the city. While in the late 30s, the number of cars in the United States numbered in the hundreds of thousands, by 2012, there were 254 million motor vehicles on the roads. And with over 34 million vehicles registered in California alone, it was going to be a challenge to find a way to make a nearly hundred year old bridge accommodate the new millenia.

Initially, the Golden Gate Bridge Board of Trustees went over a number of options. From the extravagantly expensive expansion projects to the blatantly ineffective plastic pylons, trustees and California taxpayers waited with baited breath to see how far engineers would go to secure a viable future for this bridge. Ultimately, even while mobile barrier movers had been effective in many other bridges across the United States and several parts of the world, it took the Golden Gate Bridge Board of Trustees nearly two years and $2.2 million dollars to research the feasibility.

While most visitors may miss the changing of the barriers, it’s still a very frequented spot by those visiting the San Francisco area. With walkways on either side of the six lane bridge, it’s very popular with joggers and bike riders. However, this bridge has a strict curfew. Visitors may travel the pedestrian walkways from the hours of 5 am to 6 pm. Bicyclists aren’t restricted and may travel across the bridge at certain hours on the eastern and western walkways. Pedestrians are not allowed on the western walkway.

For those who simply want to see the bridge and not engage in such a long walk, buses and shuttles regularly cross the Golden Gate Bridge. Both San Francisco Muni and Golden Gate Transit offer an exclusive Saturday and Sunday service as well their normal weekly itineraries. There is parking on the San Francisco side of the bridge for those wishing to either take a shuttle or travel across by foot. Overall, walking or riding a bike is the cheapest option as the Golden Gate Bridge thrives off of toll money extracted from southbound motorists.