Silverado vs F-150 – Someone Gets Smoked 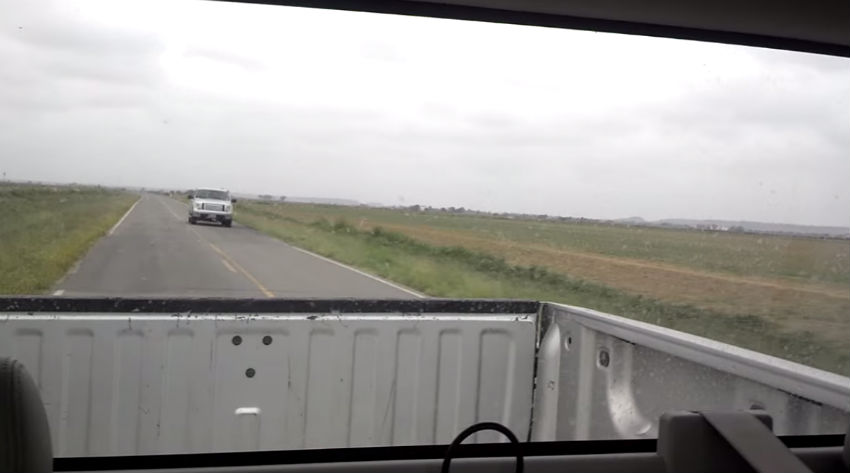 In racing, it’s not just a game of simple numbers – the driver is often the biggest variable. However, on the line is an example of where racing goes back to being a numbers game. From the get-go, the 2011 Ford F-150 promised to be a revamp of the earlier underpowered V8 F-150s released in 2010. Was that redesign ultimately worth it?

In terms of racing trucks, Fords are actually a pretty popular choice. No tuner truck, though, is going to think about racing on an open strip without proper after-market modifications. It’s a simple numbers game and stock numbers are simply not competitive either on the race track or off it.

Stock Math – Ford Should Be the Easy Bet

On the starting line, the 2011 Ford F-150 with a 5.0 L V8 has a recorded 0-60 mph time in 5.6 seconds whereas the 2011 Chevy Silverado 1500 with a 6.2 L V8 is slightly slower by a tenth of a second. This shouldn’t matter, on the surface, because for a quarter-mile challenge, the Chevy’s V8 EcoTech3 offers a commanding 420 hp and 460 lb-ft of torque. That should necessitate as long as the Ford doesn’t take the lead too early, the Chevy should overtake and finish first. END_OF_DOCUMENT_TOKEN_TO_BE_REPLACED

At a glance, the 2011 Ford F-150 has major improvements over the 2010 model. Starting with a slightly smaller all aluminum double overhead cam shaft 5.0 L V8 â it’s optimal

At a glance, the 2011 Ford F-150 has major improvements over the 2010 model. Starting with a slightly smaller all aluminum double overhead cam shaft 5.0 L V8 – it’s optimal power output is 360 hp at 5500 rpm and 380 lb-ft of torque. The only problem is it has to quickly get up to that ideal engine speed to get that power. Because it is lighter than the Silverado, that should mean it’s faster off the line.

Small Modifications to Get Ahead

Starting in 2011, major truck manufacturers like Chevy, Dodge Ram, and Ford all put more emphasis into fuel efficiency. Realizing more and more drivers were trying to get more bang for the buck in terms of fuel, Ford especially revised their later models to incorporate lighter frames, lighter engines, and better fuel management systems.

However, the second driver with the 2011 Silverado equipped with a 6.2 L V8 has two major after-market modifications working in his favor: a programmer and a Cat Back exhaust system. While most truck drivers scoff at the idea that better programming can lead to a better truck – this really needs to be emphasized in the world of racing. Stock trucks are not programmed to race. They don’t know how to immediately pull power from the engine to the drive shaft. Why? Because doing so is extremely fuel inefficient and most truck drivers don’t need to race anyone.

Tuning Trucks is More than Hardware – It’s Software, Too

Electronic Control Units are the main computers which deal with all system functions in the vehicle. Through a complex nodal network of sensors and pre-determined algorithms, most off-the-line trucks are mechanical geniuses. When new equipment gets added, engine modifications are made, and exhaust systems put in – the chip set has to acknowledge these after market modifications in order for the driver to get the most out of them. One of the biggest manufacturers of these engine tuners is DiabloSport and Bully Dog. Both make tuners which are arguably legal in 49 states – but definite requirements for serious racers.

The DiabloSport Trinity is one of the top of the line programmers for Chevy trucks. Everything from performance, diagnostics, and monitoring options are available on a GPS sized screen mounted on the dashboard. The plus side of this style of system is it makes engine monitoring much easier than traditionally simply looking at the tachometer. It can also track stats such as the quarter-mile drag race and even laps. It’s an all encompassing unit – which is rare because most after market manufacturers specialize on one thing: temperature of exhaust, engine temp, and combustion. The Diablo Trinity ties all of these into one unit and doesn’t require any additional modules.

The best part about finding a good programmer unit to tune up a racing truck is that the DiabloSport Trinity T-1000 customizable presets. You know your truck better than anyone else and with the Trinity program system, you can customize for each time of race. However, for those living in states with strict pollution control – like California – this program set may not be street legal. It’s important to check with one’s local DMV prior to installation.