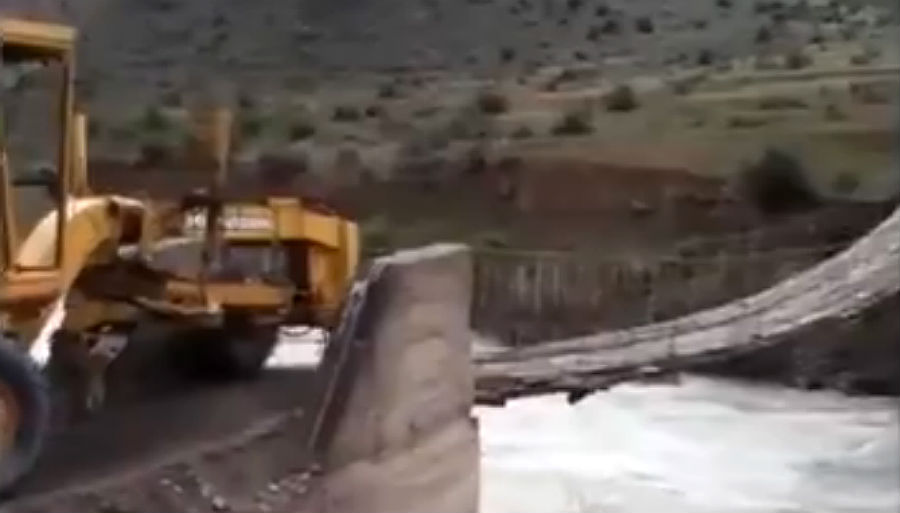 In a word this looks crazy. This guy is driving a massive motor grader over a rickety wooden suspension bridge. When he first attempts to cross the bridge, he pauses momentarily and there is an exchange that occurs. At first, I wondered if the individual talking to him was warning him about making the trek over the bridge. Then, it became very apparent that this was nothing of the sort as he rolls the massive beast, slowly granted, over the suspension bridge, safely to the other side.

If you look closely at the bridge while the grader moves across, the sway is consistent with the position of the grader. It looks like this massive downward bubble slowly inches across the river until the grader safely climbs up the other side.   A quick rundown of specs concerning motor graders will make this feat to seem even more astonishing. An average motor grader weighs in at somewhere between 39 to 45 pounds.

That is assuming a typically equipped model with a grading blade and fork. You can probably take several hundred pounds off of this one because the grading fork is not attached.  So how is the driver able to run across that rickety bridge with no fear for his own life or safety? END_OF_DOCUMENT_TOKEN_TO_BE_REPLACED

To answer that lets take a closer look at suspension bridges. Suspension bridges have been around for centuries. They are the earliest type of bridge in fact. When Spanish conquis

To answer that lets take a closer look at suspension bridges. Suspension bridges have been around for centuries. They are the earliest type of bridge in fact. When Spanish conquistadors went to conquer parts of Peru, they were met with an ancient civilization that had miles of primitive vine suspension bridges that they used to traverse chasms and such.We have gotten a little more complex since then.

We use cables, towers, and trusses today. So what makes them so popular? Their value lies in their ability to traverse longer distances than a traditional arch bridge or beam bridge. Suspension bridges can traverse distances up to 7000 feet, making them some of the longest bridges in the world. Their superiority is an engineering marvel. With a suspension bridge all of the weight is transferred from the cables to the anchor points at the end. Now, knowing that, notice how big the concrete anchors are at either end of the bridge. Typically, the suspension cables are mounted deep inside the anchors and dispersed, so that they do not become frayed or break off in one large piece under heavy stress. As such, they are quite strong too.

In their early days of use, their strength was under estimated, since it is not possible to see everything that meets the eye. One such bridge was retired after it carried a load more than 2.5 times of what was considered to be its “maximum load weight” (that would be the Niagra Railway Bridge, that was constructed by John Roebling and used until 1855). Take a look at this picture below to see what is going on internally with the concrete mounts featured.

Notice the slightly bent angle mount of the internal anchor? This helps evenly transfer the load to the ground. This is the same sort of thing that is happening with the anchors featured here. Once you have load transfer under wraps, it is possible for a bridge to appear as if it can carry items that are way beyond its load limit, just like the motor grader below. In fact, some would say the rest is simply water under the bridge.