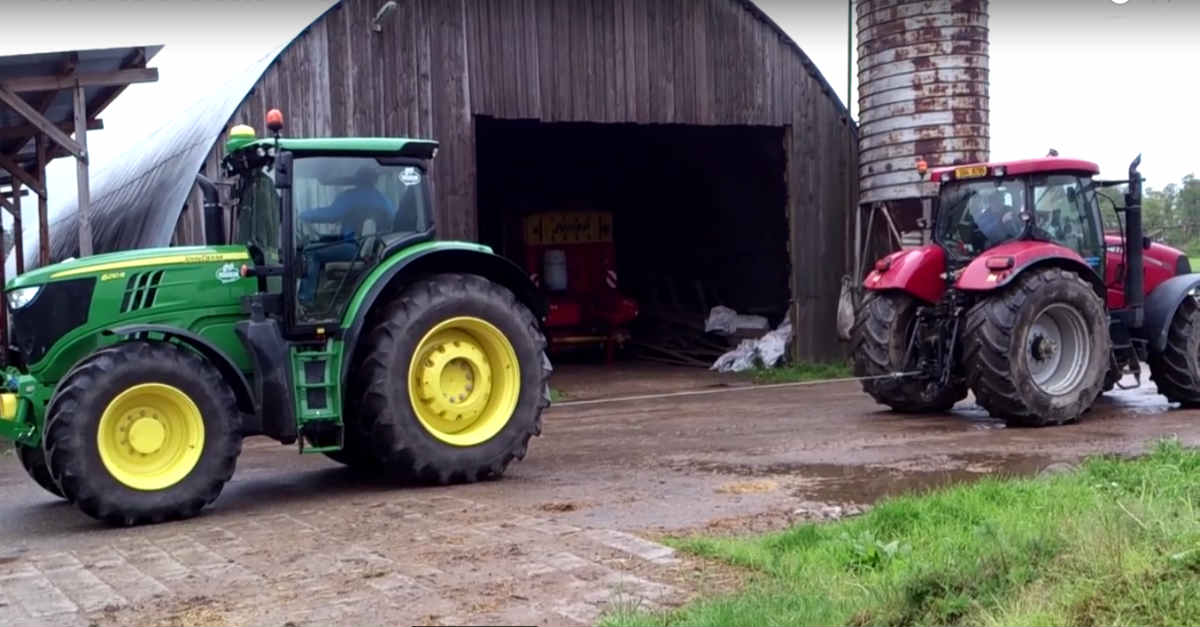 If you’ve ever worked a hard day in the fields, you’ll certainly appreciate the integrity and power of a good John Deere tractor. There’s no denying it comes equipped with a powerful V6 Diesel PowerTech engine that’s made for long days and hard terrain. But what happens when a group of bored farmers get together to find out who’s the real king of the hill?

It’s a classic show down: two high-powered tractors, one steel cable, and plenty of pride on the line. One’s an American made classic and the other is well-renowned European model known for its efficiency and raw power. But what about when the world of “specs” meets the cold hard reality of a face-to-face challenge? These farmers find out. But somehow you can tell, despite the fun of testing two extremely powerful tractors against one another, they’re not looking to destroy almost a quarter of a million dollars worth of equipment.

Deere Vs. Puma — “On The Books” There’s A Clear Winner

Horsepower will only get you so far in the world of tractors. Ultimately, it’s a good combination of torque and tow capacity that most farmers are looking for. To do some heavy lifting, we’re going to first need to take a look at what’s underneath that Case lH Puma 210 series that comes spec’d with a 19-speed 4WD diesel engine capable of generating a rated 203 hp. But when it comes time to throw on the drawbar, we quickly see that horsepower drop to 155.8 hp. Not weak by any stretch of the imagination, but what does John Deere bring to the table? END_OF_DOCUMENT_TOKEN_TO_BE_REPLACED

Well, the John Deere 6210R has its mighty 6.8 L V6 Diesel PowerTech PVX engine â it’s a beast and a half for sure. It’s rated output is 240 hp. But based upon engine spec

Well, the John Deere 6210R has its mighty 6.8 L V6 Diesel PowerTech PVX engine – it’s a beast and a half for sure. It’s rated output is 240 hp. But based upon engine specs alone, there’s still no clear winner. The Case lH Puma 210 is lower to the ground and clearly has an advantage in terms of power-to-pull ratio. John Deere has height, a bigger back wheel base (2.8m), and a hands-down more powerful engine. The results should be easy to guess, right?

Watch What Happens Next!

Well, as it turns out – numbers don’t lie. While the Puma definitely made a great show of force, it wasn’t anywhere capable of resisting the pull of this John Deere 6210R tractor. When the John Deere puts it in low gear, you can see the Case lH Puma’s back wheels spin with absolutely no traction. But aren’t the conditions a bit unfair? Both tractors are, after all, situated on hard pavement and what looks to be brick inlaid road. That is neither tractor’s true forte. And looking at the Case lH Puma 210’s back wheels, they definitely have a great groove to them that would probably sink right into the mud and clay and paddle on through.

That’s it – we’re officially calling a rematch! We desperately need to see what happens when both of these tractors are put out in a fallow field and set head to head. Case lH is definitely lower to the ground and likely to pull John Deere all around. “Is that a bet?” you may ask. Well, let’s just call it a gentlemanly wager. John Deere has a fantastic hard working reputation that has earned it endless respect in the farming and AG communities. And, like most American-made and designed vehicles, it’s always made bigger, stronger, and more powerful. The Europeans put everything they had into designing something that does the same job but more efficiently and with less fuel consumed. A simple look at either’s gas tanks will tell us that. The John Deere 6210R has a fuel capacity of 465 liters (that’s 123 gallons in freedom units). Needless to say, it was designed to work ALL day without a break. And when you’re feeding a 6.8 L diesel engine, you’re gonna need it! Diesel is way more efficient for agricultural work but let’s be honest, if you’re working on 50 or more acres of land through a mixture of terrain, you need a tractor like John Deere. The Case lH Puma 210 has a fuel capacity of 439 liters (116 gallons, again, in freedom units). That means either can easily make the time in grade, in terms of working long unforgiving days in muddy, trodden fields. So, looking at these two hardcore tractors side-by-side, we’re seeing that either would be a fantastic choice. The European Case lH Puma 210 is obviously the more fuel efficient and the John Deere 6210R is the bull in the china shop. If you need to win a tractor-pulling contest, though, John Deere may be the clear bet to place. We’re still holding out hope, though, that in a muddy field, Case lH Puma 210 will show up stronger than expected.

What do you think – Puma or Deere? Who’s the clear winner in your book and why? Tell us about it in the comments section below!