Paula Creamer is Not Your Average Golfer 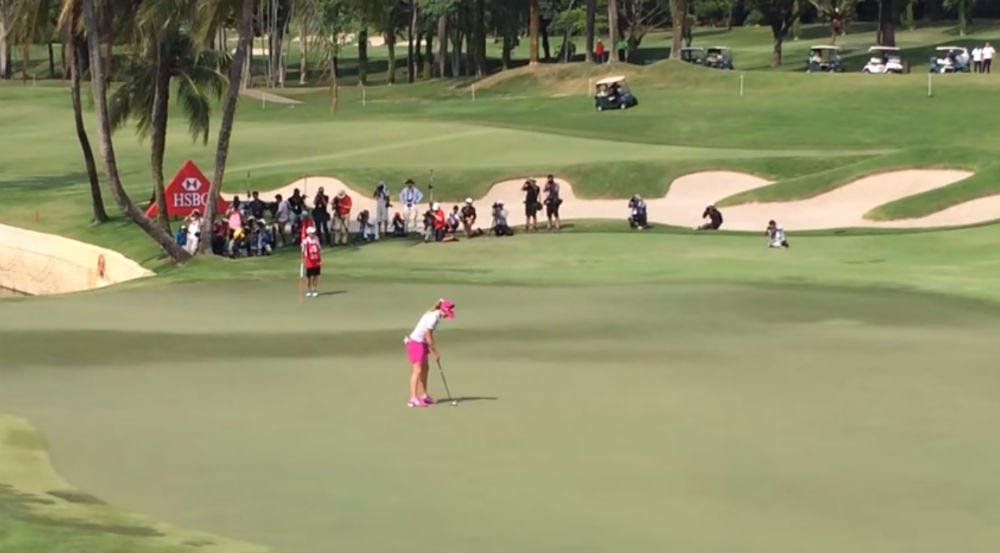 Alright, so we all know that Paula Creamer is drop dead gorgeous. Just do a quick Google search of her and you will see what I mean. She looks stunning in just about everything. And did you know that she is a top golfer, too? I’m kidding, of course you knew that. However, with all her beauty nothing is more beautiful than the shot she makes right here. This eagle putt is unreal.

Put yourself in her situation. She has been playing for several days, and it all comes down to this. She is pitted against Spanish opponent, Aha Munoz, and is going for a putt to put pressure back on Munoz. If Creamer doesn’t make this putt, and it looks as though she won’t simply because of the distance, the pressure will be on her opponent to hit the green and get into some sort of putting range in order to beat Creamer. Paula is practically a shoo-in as victor at this point, yet, stranger things have happened. The strangest, however, is still yet to occur.

Paula steps up and addresses the ball showing proper form and stance. She gives a nice clean putting stroke, making contact with the ball in a firm manner that sends it drifting across the putting green at a nice, medium speed. The angle looks rather peculiar, almost as if she is putting in the complete opposite direction of the hole, however, she is merely reading the break. The hill rolls gently across the putting green and is the primary obstacle between her ball and the cup. If not for it, she would have a straight shot. While she hopes she might sink the putt, in actuality, she is really just attempting to get close to the pin and clinch the win, since her opponent has yet to even make it to the putting green. END_OF_DOCUMENT_TOKEN_TO_BE_REPLACED

â¨â¨As with all miracles that happen during golf tournaments, this one is just as grand and dramatic. Once she hits the ball, it makes it’s way towards the hill and begi

As with all miracles that happen during golf tournaments, this one is just as grand and dramatic. Once she hits the ball, it makes it’s way towards the hill and begins its upward climb. Then, it breaks gently to the left while still rolling across the hill before it makes its descent towards the pin.

The moment it leaves the hill, it is as if some unforeseeable force lined the ball up perfectly with the hole. The next thing you see is the ball rolling towards the cup as if it were drawn there magnetically. The tell-tale kerplunk of the ball in the cup clinches the hole with an eagle putt and the crowd goes wild. She clinches the win for the 10th LPGA title with all the fanfare and noise that you would expect at a King’s coronation. You could try this shot all day long and never be able to replicate what she did. Truly a remarkable shot.