Trout Fishing With A View 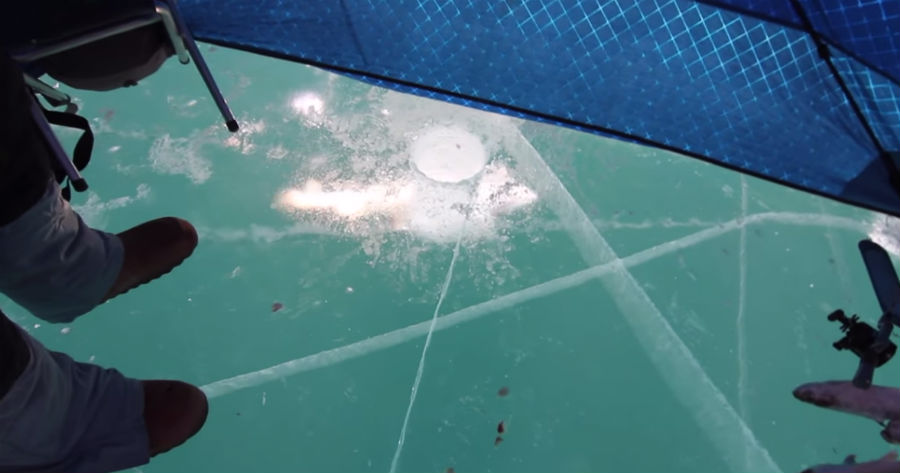 Ice fishing is one the most misunderstood glories of nature. This could be due to the austere conditions of the sport. Let’s face it, people don’t like being cold and don’t like waking up early. There is also the fact that less than half the country can take to ice fishing, making it an even less appealing sport geographically.

The thing is, when equipped with a rod and reel, and nothing more than a bucket to sit on, ice fishing for trout can be one of the funnest adventures you could go on. The reason I name trout specifically is because they are cold weather fish. Trout tend to move towards the shallow waters during the winter, allowing dedicated ice fishers to arm themselves with rods, reels, lures, lines and the steel resolve to catch a fish.

Trout like to swim less than ten feet from the ice and tend to run parallel with it. These fish are feeding all winter long, constantly searching for a bite to eat. If that bite to eat is attached to a hook then an ice fisher has his day made. END_OF_DOCUMENT_TOKEN_TO_BE_REPLACED

The ice fishermanâs resolve is tested the most when he or she wakes up. The weather is at its worst and they still have a task ahead of them. Trout hunters have the daunting

The ice fisherman’s resolve is tested the most when he or she wakes up. The weather is at its worst and they still have a task ahead of them. Trout hunters have the daunting task of being on the water before the sun even peeks above the skyline. It’s not just enough to be out of the icy cold lake before the sun is up, the fishing holes must be drilled before even the sun comes up.

The fisherman must be stealthy and always working to fool the fish. One must set up their gear early and keep it hidden. Your rod and reel needs to placed back from the hole, along with your bucket. Below your feet and below your bucket needs to have a healthy amount of snow. Since fish can read the shadows above them your feet and bucket will be evidence enough to scare away the cautious-natured trout. This also means once your set, your set. You move as little as possible and everything from your thermos, to your extra lures, and tackle boxes need to be within arms reach, and also on top of snow.

So what’s your bait of choice?

In this situation live lures are by far the best bait. Sometimes trout are picky, and sometimes they want to eat everything. Lures like Nymphs, waxworms, and minnows are often the most effective bait for hungry trout. Remember we mentioned that trout are cautious creatures. This means they can and do take note of changes in their environments.This includes the line you use. Use a thin four pound line that is a color that matches your fishing locations background. This will keep them from noticing the line and keep an eye on the bait.  Also trout can actually smell well under water so use a cover scent on your line.

Use the same logic regarding weight, if you choose to use it. Small single bb style weights will be the most unobtrusive. This small ball won’t reflect the light, and the trout won’t notice it. Ice fishing is not for the mild or the meek. Hard core dedicated fishermen are the ones who get out there and get the prize. This kind of fishing is a dedicated sport that requires more skill, determination, and overall gall than most people give credit for. Remember there is no guarantee when fishing. It’s part luck, part patience, and 75 percent skill. Ice fishing is a fun, rewarding sport, that takes more skill and strategy than most know.