Is It An Alberta Trophy Pike Or A Musky? We Need Your Input 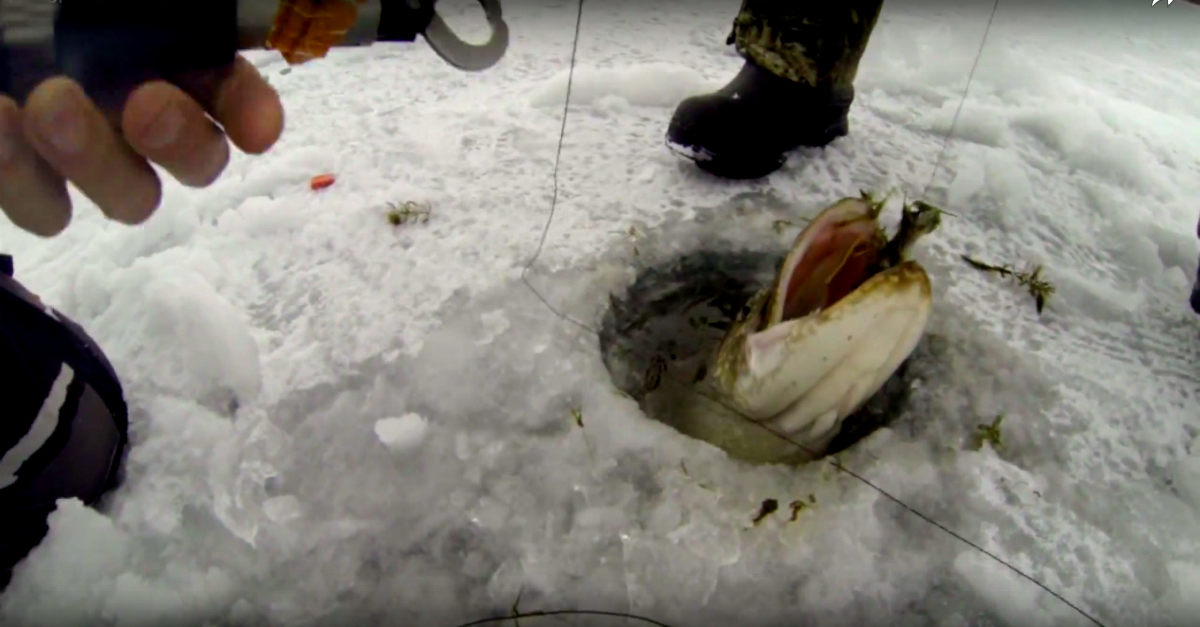 Ice fishing on the frozen lakes of Alberta can be potentially really, really rewarding. We’re talking some of the most pristine, huge fish in North America and all it takes is several strong layers of clothing, some fishing line, and a few good traps. Well, now we’re confronted with a real mystery – is the trophy Pike we see one man pulling up out of the ice an actual Pike or an elusive doppleganger known as the Musky? Before you tell us which in the comments below, take a look and read on as we go into our theories.

For those unfamiliar, tiger muskies are the sterile product of a northern pike and a true muskie. Muskies – also known as Muskellunge – often get confused as northern pike by even some experienced fishermen. They can be found in the lakes of both Ontario and Alberta and can grow to some enormous lengths. They’re related to the pike but are often called the “ugly pike” due to their appearance. They’re very predatory and extremely prone to ambush style tactics. Their skin has an almost tiger-like appearance which can often get confused with the northern pike, who have more of a leopard dot pattern.

Taste-wise, they’re both comparable and definitely good eating. But, for competition, muskies and their sterile cousins the tiger muskies, can catch up a lot of competitive fishermen in the race to find that perfect trophy pike on the frozen lakes of Alberta. END_OF_DOCUMENT_TOKEN_TO_BE_REPLACED

If you take a look at this, you’ll see a clear pattern on the skin of this fish as it comes out of the water. Based upon this leopard print skin, our first guess is that this is

So Is It A Muskie Or Is It A Pike? Let’s Take A Closer Look…

If you take a look at this, you’ll see a clear pattern on the skin of this fish as it comes out of the water. Based upon this leopard print skin, our first guess is that this is indeed a pike. The only part that would seek to give any counter-argument is the maw on that sucker as they pull it out of the water. Muskies have a huge maw. And they both seek out the same bait and patterns pike generally do. And, because they’re related, if both muskies and pike are in the same water, they sometimes interbreed. This produces some odd mixes which are hard to characterize. In general, when fishing for either a pike or a muskie, a 14-20 ft stress line is ideal. Because their weight isn’t likely to exceed that (unless you truly are a champion pro ice fisherman), it’s not a bad type of line to use.

So, our verdict? We’ll call it a pike and not a muskie. While there is a bit of hot debate about it, we’re in favor of giving the fisherman the benefit of the doubt.

While ice fishing for pike in Alberta is a fun activity, if you end up finding a northern pike down in, say, Washington State, the Washington Department of Fish & Game actually characterizes this breed as a semi-invasive species. Their best guess is people have their own private fishing reserves and have been stocking northern pike for competition and casual fishing. These pike then find their way into the local watersheds and eventually migrate south into places they’re not supposed to be. This is detrimental because the local ecology isn’t set up to handle them and they have no natural predators in more southern waters. As such, they can become a big problem for other fish and animals living in those streams and rivers. That misfortune can turn into a great excuse to go fishing for pike in Spokane rivers and lakes. The Washington Department of Fish & Game asks that you take a picture of any pike you catch (granted you can properly identify it as such) and then general orders are to kill it. They say kill, I say cook. The northern pike offer up some of the most delicious wild game fish known in North America. The meat is very succulent. It can get a bit spiny and require some delicate picking but it is most certainly a memorable fish once cooked to perfection.

The tiger muskie, on the other hand, is a sterile variety of fish specifically developed for local fishermen outside of the northern climes. It’s a fish that doesn’t breed and, as such, is perfect for annual stocking of fish. They have a minimum size limit for catching of 50 inches and most fishermen are only allowed to bag one fish. This can be a fantastic way to train on the same tendencies of the northern pike so if you decide to take a spring or fall fishing trip up in Alberta, you’ll have a good bit more experience under your belt when you go out for that trophy pike.