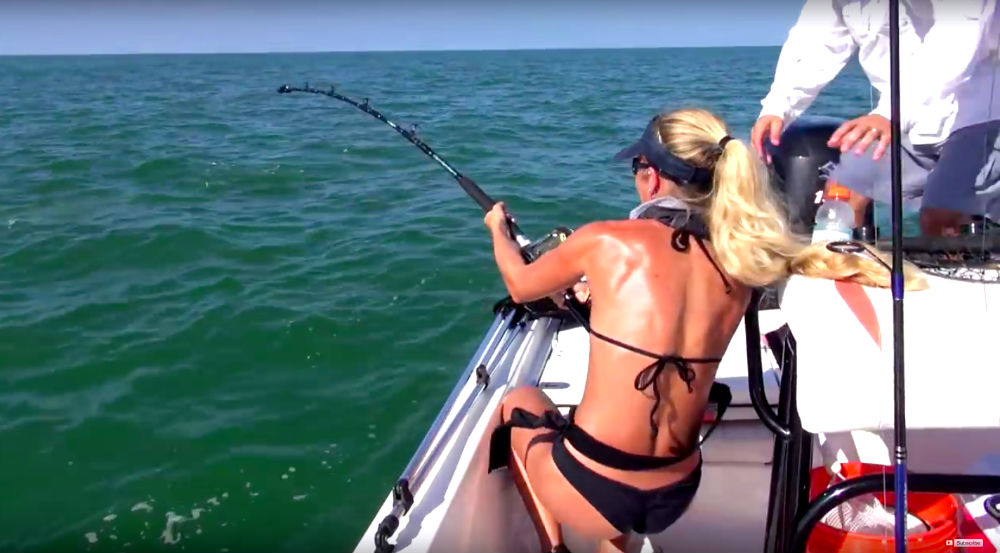 A lot of strange things can happen in Everglades National Park, including catching monster sharks. This features none other than Darcizzle in action herself. While it is nice to see a babe in a bikini, seeing one fight a monster shark provokes an entirely different level of hotness for us guys. Leave the bikini brand for the beach.

We like to see our women on the ocean fighting Goliath sea creatures. Check this out for yourself and you will see a real life version of beauty and the beast. Only in this version, the beast does not growl and snarl, he kicks and thrashes like a fat kid being pulled from a candy store. Not the most politically correct illustration I know, but it certainly gets the point across.

Bull Sharks in the EverGlades?

That’s the thing about the Everglades though my friends. It can paint a lot of pictures for you. The unpredictable is always on tap as something that can be served up hot, definitively and swiftly, regardless of the time of day. Known most often for its gators and pythons, you forget that there are these types of wildlife lurking out there as well. Charter saltwater fishing trips are usually something we think of with places set against pristine coastline and gorgeous blue water. However, there is plenty of saltwater present in the Everglades, and this type of charter fishing is a whole different breed of dangerous. Bull sharks dominate the water here. See this long enough and you will see this played out in real life. As Darcie reels in one shark, another shark attacks and they begin to fight. END_OF_DOCUMENT_TOKEN_TO_BE_REPLACED

This speaks to the nature of the shark. They are indiscriminate eaters and will eat anything they can sink their teeth intoâ¦ including other sharks. The saltwater is teeming

This speaks to the nature of the shark. They are indiscriminate eaters and will eat anything they can sink their teeth into… including other sharks. The saltwater is teeming with life, and often times that life is violent. Add bull sharks to the population and it is even more so. Bull sharks are extremely aggressive in nature. They are also unpredictable. They do not have a sense of boundary. I say that because they have spotted bull sharks in the fresh water of the Mississippi River as far north as the state of Illinois. Oh yeah, I forgot to mention they can swim in freshwater too. They will attack unprovoked and attack to kill. Warning bumps are not in their nature. Think about that the next time you are on your next deep sea charter fishing trip. Then think about the fact that a girl in a bikini does this all the time!

Anyway, Darcie is prepped beforehand by the boat captain, and they both give each other a nervous laugh. The bottom line is this. She does not want to fall overboard while having a shark dangling from the end of her rod and reel. To do so could be disastrous. It could spell the end for all future Youtube videos and social media postings. He tells her if you put a suitcase in that part of the ocean, filled with a million dollars, and told him he could have it if he could swim and retrieve the case, he would not do it. That is the level of uncertainty they are dealing with here.

I’m not too sure if she took much comfort from those words since she has a pole mount strapped around her waist. Yes, it does provide you a bit of leverage while rankling your beast, but if you hang onto your rod and the fight gets too intense, it could serve to leverage you right off the bow and into the drink. It looks like she looses her footing a few times and has to be assisted during the fight.

Fortunately, she holds firm, but not before the fish wears her out. Sharks like the bull shark that are this aggressive in nature, are always very active. All of that activity translates into wearing your arms out during a shark catch. It can also leave you gasping for air. It takes a very long time to wear down an aggressive shark. The fight is simply physically exhausting. Darcie knew this though and takes it all I stride. She considers it part of a days work. Winded and smiling, she spins her tale. Be sure to see till the end to see her spin it. We give her mad bonus points for no exaggeration, and more bonus points for being able to pull off one fantastic catch in a bikini. I bet you couldn’t do that.