Ever See A Drawbridge Open And Think, “I Can Make It.” 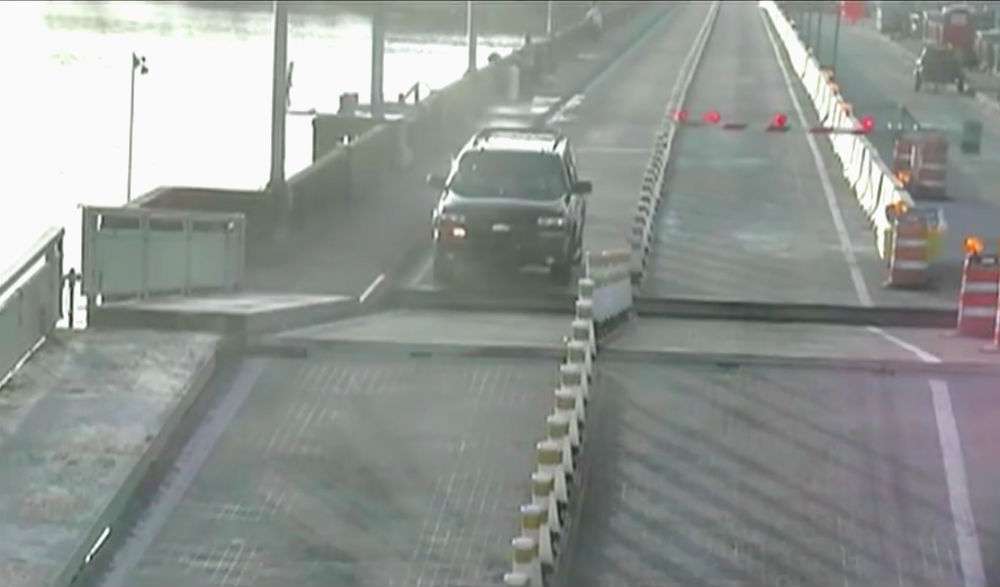 It’s no simple matter careening through a roadblock and clearing an opening drawbridge, but it happened in West Palm Beach, Florida. A driver, who was supposedly looking at his GPS, managed to accelerate through a barricade and clear a death-defying gap. He was rewarded with smashing in the entire front end of his Chevy Tahoe. It’s a small price to pay for living on the edge. That said, we generally advise everybody to always keep their eyes on the road. It’s not just road blocks and bridges that drivers have to worry about out there. Let’s dive in a bit more and find out why that 2003-2006 model Chevy Tahoe did what it did.

One of the oddest things about this case is the vehicle in question. It wasn’t some sleek Lamborghini or high-intensity Aston Martin – it was a simple, robust, and definitely heavy Chevy Tahoe. However, even for a standard Flex Fuel unleaded SUV, the Chevy Tahoe managed to turn some heads back in their 2003 models with a very powerful Vortec 5300 engine. This 5.3 L V8 unleaded gasoline engine packed an impressive 280 to 295 hp. That’s enough power to get a big, heavy steel-studded SUV up to cruising speed.

Never fear, though, because Chevy has since upgraded to a pretty high-octane, powerful 6.2L Vortec 6000 engine. It’s got all the horsepower of a turbo-charged 6.0 L Cummins. Under the hood of the new Chevy Tahoes, there’s options that give it up to 405 hp and 417 lb-ft of torque! While we wouldn’t recommend jumping any toll bridges, it’s certainly enough “get up and go” to bring a heavy SUV platform to high speeds – or haul another buddy out of the mud. END_OF_DOCUMENT_TOKEN_TO_BE_REPLACED

Looking back at this, it seems pretty evident that the dude sped up after he burst through the roadblock. We’re not trying to throw this guy under the bus by any means and hone

Raw Speculation: Maybe He Jumped The Tahoe Because He Could?

Looking back at this, it seems pretty evident that the dude sped up after he burst through the roadblock. We’re not trying to throw this guy under the bus by any means and honestly glad he managed to make it out of his Chevy Tahoe with only some superficial bumps and bruises. It’s a testament to vehicle safety standards, that’s for sure – the Tahoe hit a solid concrete barrier at probably close to 45 mph.

This is also a great time to bring up safety. Whether cruising on the freeway in an American classic SUV like the Tahoe or GMC Denali, it’s important to realize that size doesn’t mean invulnerability. Too often, we’ll see people doing some crazy things in their modified SUVs and cars. We’re all for having a great time – but be careful out there!

One of the reasons why Chevy Tahoes and the GMC’s Denali did so well in the market was they were large, bulky SUVs that could carry a bunch of people and equipment. Great options if you’re interested in long outdoor camping trips or just going out on the ranch. It’s one of the cruddier things about many of the other manufacturers’ SUV lines – they’re all going to smaller crossovers. Let’s not pretend that a 2016 Ford Explorer is anywhere near up to handling the same rugged outdoor environment a properly equipped Tahoe would be.

Let’s throw this out there – take it or leave it – Ford should develop an F-150 Raptor style of SUV. It’s so necessary. The F-150 Raptor took the marketplace by storm even being relatively underpowered for its weight class. The reason? After market modifications. The ability to take a decent starting engine and modify it to the point that you can get that rugged performance, that’s gold right there. And while Chevy still has its flagship Silverado truck line to compete against, there’s something to be said about the style and pizazz of that F-150 Raptor model.

Why on earth did Ford deviate from it? We’ll never know. Speculation revolves around Ford wanting to make their engines more “efficient” (“eco-friendly”) but let’s be honest – the sacrifice to raw performance is not seen in the gas mileage.

What we really need is a new class of SUVs that are able to handle the obstacles that working folk need to tackle and perhaps a Ford Raptor-styled SUV would be the perfect addition to the team in a generational line progressively getting more crossed over. What are your thoughts? And did this inspire you to get a hands-free GPS? Tell us about it in the comment section below!